The Church of Santa María (Viana)

The Church of Santa María (Viana) 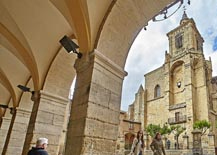 The Church of Santa María de Viana, with its robust contours and strategic location, takes us back to the turbulent past of this area, being built up on a hill by the Crown of Navarre to defend it from Castile.

It has a magnificent Renaissance portico, one of the most monumental examples of Hispanic Renaissance, which served as a model for other churches. Beneath it lie the remains of Cesare Borgia, prince, soldier and Cardinal, whose turbulent life is well worth a film script.

The 15th-century Italian philosopher and politician Machiavelli used him as a model to write “The Prince”, a work which revolutionised the political thinking of the times.

The church of Santa María rises up majestically on the main street of Viana, a town of 3,500 inhabitants on the border with La Rioja. Standing up on a hill to defend Navarre against Castile, it is the last town on the Pilgrims’ Way to Santiago in Navarre.

The church was built between 1250 and 1312 in Gothic style and was completed between the 16th and 18th centuries. Its robust structure and strategic position at the centre of the hill turned it into a defensive stronghold until the 19th century. Declared a Historical and Artistic Monument in 1931, the church boasts one of the most imposing porticos of the Spanish Renaissance.

On the outside, the Gothic part can be seen in the ashlars and the simple front dating from the 14th century with three archivolts, presided over by the Virgin Mary and Child, worshipped by two angels.

The most impressive doorway is the one on the Epistle side of the church, in Renaissance style. Built in the 16th century, it is structured as if it were a large stone altarpiece, combining both architecture and sculpture. It is in the shape of a niche and was the model for other Renaissance and Baroque churches. Take a look at its iconography: you will recognise passages from the works of Hercules, scenes from the life of Christ, the Assumption and Coronation, a seated image of the Virgin Mary and characters from the Old Testament. The tower was built in the 16th century, and in the 17th and 18th centuries the retrochoir was added and the capitular hall, sacristy and the chapel of San Juan Ramo were built.

At the base of the doorway is one of the most visited parts of the church: the tomb of Cesare Borgia, the ambitious son of Pope Alexander VI. He was a prince, soldier and politician. He died in 1597 near Viana at the hands of the soldiers of the Count of Lerín. The original tomb having disappeared, his remains rest under a marble slab on which you can read: “Cesare Borgia. Supreme General of the Armies of Navarre and the Pontificate. Killed on the fields of Viana on XI March MDVII”.

The interior of the church of Santa María is similar to a cathedral. It has three naves of unequal width, with four sections, side chapels and a high choir at the bottom. The Gothic style can be seen perfectly in the walls and vaults of the naves and the triple chevet. The church also has a clerestory or gallery by which you can tour the church via a walkway formed of elegant traceries.

Various altarpieces from the 17th and 18th centuries have been preserved, including the high altar, dedicated to the Virgin Mary and regarded as one of the finest examples of Navarrese Baroque. In the Capitular Hall there is a beautiful Hispano-Flemish crucifix. In the chapel of San Juan del Ramo you can see works by Luis Paret, a Spanish painter from the Rococo period. The choir stalls and the collection of liturgical apparel, silverwork, reliquaries and prayer books, round off the heritage of this fascinating building.